This article is more than 24 months old and is now archived. This article has not been updated to reflect any changes to the law.

The eyes have it! Optometrists win over SRO in payroll tax case

The recent decision of the Supreme Court of Victoria in Commissioner of State Revenue v The Optical Superstore Pty Ltd provides that certain distributions under an express trust (a commonly used business structure by medical and healthcare professionals) were not subject to payroll tax. In light of the Court?s decision, taxpayers using similar business structures (or wishing to do so in the future) should review their arrangements and how this case could impact their payroll tax obligations.

On 21 September 2018, the Supreme Court of Victoria dismissed an appeal by the Commissioner of State Revenue in Commissioner of State Revenue v The Optical Superstore Pty Ltd [2018] VSC 524 (Optical Superstore Case). The Court found that certain distributions under an express trust arrangement were not deemed to be wages that were subject to payroll tax.

Summary of the facts

The Trustee entered into contracts with optometrists (either directly or with an optometrist's controlled company or trust) (Optometrist Entities) which involved the following:

If the consultation fees earned by an Optometrist Entity in a period were less than the 'Reimbursement Amount' calculated, the Trustee was required to cover the difference (referred to as a 'Location Attendance Premium') from its own funds.

The Commissioner of State Revenue assessed the distributions from the express trust (both the Reimbursement Amount and the Location Attendance Premium) as giving rise to payroll tax obligations.

A simple diagram illustrating this arrangement is set out below. 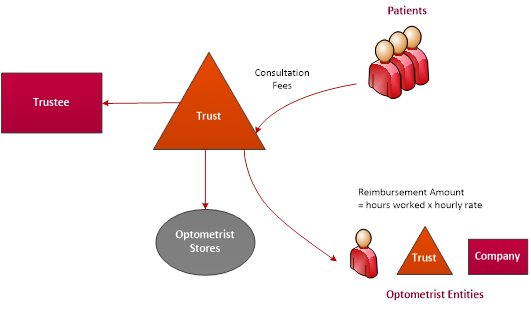 Summary of the payroll tax rules

It may assist to briefly provide an overview of how payroll tax is imposed and the relevant provisions of the Payroll Tax Act 2007 (Vic) (PTA).

Generally, payroll tax must be paid on wages and other payments deemed to be wages under the PTA.

The PTA also provides that payments made under certain arrangements (referred to as 'relevant contracts') with independent contractors (like the Optometrist Entities) will also be taken to be wages and subject to payroll tax. Section 35(1) of the PTA provides that payments to independent contractors will be taken to be wages (and therefore subject to payroll tax) where:

What were the parties disputing?

The parties were arguing whether the Reimbursement Amounts were subject to payroll under section 35(1) of the PTA. Requirements (b) and (c) were not in contention by the parties. Accordingly, the key questions for the Court were:

The Victorian Civil and Administrative Tribunal (VCAT) found that the Location Attendance Premiums were subject to payroll tax and this was not disputed on appeal.

Findings of the Supreme Court

In coming to this view, Justice Croft made the following comments regarding the nature of payments:

The above finding was on the basis that the arrangement between the parties constituted an express trust (Justice Croft drew a contrast to a situation where a person is a beneficiary of a discretionary trust and no declaration has yet been made in favour of that beneficiary yet, in which case a distribution to that person would be a payment (as the beneficiary is receiving money that was previously not theirs)).

Things to look out for

The Court's view in The Optical Superstore Case limits the reach of the 'relevant contract' provisions and provides that distributions made under express trusts, where the money is already beneficially owned by the recipient, will not be considered wages for payroll tax purposes.

This is an important clarification on the application of the payroll tax legislation in this area, as many medical and health professionals use similar business structures to the one described in the Optical Superstore Case.

However, caution should be exercised in self assessing that your structure falls outside the scope of the payroll tax regime for the same reasons set out in the Optical Superstore Case. This is particularly the case given Justice Croft's comments that the distributions from a trust more broadly could be for or in relation to the performance of work relating to a relevant contract (and therefore could be subject to payroll tax if they are 'payments').

If you use a similar business structure to the one used in the Optical Superstore Case or are considering doing so, you should review your own arrangements and consider the impact of this case on your potential payroll tax obligations.

For more information, contact Maddocks on (03) 9258 3555 and ask to speak to a member of the Revenue Practice Group.

Daniel is a lawyer in the Maddocks Tax & Revenue team.

His advice covers both direct and indirect tax considerations.

Prior to joining Maddocks, Daniel worked at a Big Four Chartered Accounting Firm focusing on tax consulting for mergers and acquisitions.