This article is more than 24 months old and is now archived. This article has not been updated to reflect any changes to the law.

Blockchain: Why tax and accounting professionals should get on board

The advent of cloud-based accounting systems has proven to be game-changing. Even the cloud itself, however, could pale in comparison to blockchain technology, which is potentially one of the most disruptive technologies to affect the entire business world.

According to The World Economic Forum, 80% of banks are predicted to start blockchain projects this year, and US$1.4 billion has already been invested in the technology over the past three years.

After a slow start, much is now being written about blockchain, and its use is increasing, and tax and accounting professionals should not ignore it.

Blockchain stores records in groups called blocks. Each block is time-stamped and linked to the previous block. It's incorruptible and unalterable, making it ideal for recording transactions without requiring a central authority.

How information moves through distributed ledgers in "blocks", using money as an example 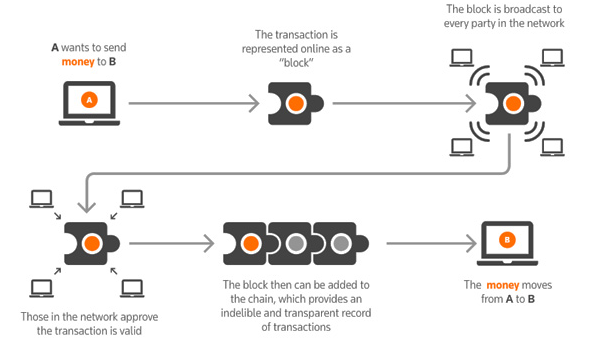 What makes distributed ledgers so disruptive?

Information contained in a distributed ledger is updated in real-time, and it's permanent, so no one can delete the information. All the information is publicly viewable, so the blockchain is completely transparent.

Importantly, because blockchain lets participants verify and audit transactions without the need for a third party, it delivers a level of certainty and trust not seen previously in internet-based transactions. It practically automates parts of the audit process, for example.

Views on Blockchain are divided — from supporters to opponents, and the "why worriers?" in the middle, but regardless of how it is being judged, it's not a matter of if blockchain technology will become pervasive; it's a matter of when. So it's essential for tax and accounting professionals to become familiar with the blockchain and how it works

What industries will be affected?

The accounting industry is likely to experience the most disruption as the result of blockchain technology, since it fundamentally changes the way transactions are made and recorded. But blockchain, because it removes the need for a third party or middleman, has exciting potential applications outside of financial transactions. Indeed, Steve Mendelsohn, Senior Vice President, Global Tax and Accounting Market Development at Thomson Reuters says there is even a case to be made for blockchain as the ultimate digital disruptor in the global taxation landscape. Michael Meisler, Partner & Global Blockchain Tax Leader at EY in the US told Steve that blockchain "has the capability to create a fundamental change in how we tax, because it creates a world where every single leg of a transaction is tracked in an immutable record, which makes audit detection risk loom even larger".

Steve said this point has not been lost on government tax authorities, many of whom are actively experimenting with blockchain-based solutions for auditing and filing taxes. He said Luxembourg has been one of the most progressive countries on this front, investing heavily in a technology company called LuxTrust, which has just created a blockchain identity platform that will be used throughout the country in everything from tax filing to regulatory enforcement. China is also reportedly planning to incorporate blockchain into its tax collection process within the next 5 years.

Blockchain is already being utilised by the legal industry, in the form of "smart contracts". The banking sector is also adopting it, with Singapore Central Bank using the technology in its payment transfer project, and other banks in the US and Japan are also exploring its potential.

Consumer demand is driving the development of exciting applications in other industries, from crowd funding, auctions, music distribution and sports betting to verifying the origin of artworks and transfer of property title.

Blockchain will inevitably change the nature of jobs, and for tax and accounting, this may mean some roles disappearing entirely. Whilst it will make auditing easier and more reliable, and reduce the possibility of error, this also means that time-consuming and error-prone manual tasks could also be obsolete.

Some of the industries likely to be disrupted by blockchain include:

So how will blockchain disrupt the tax and accounting industry?

For example, once transactions are entered into the blockchain, they can't be altered. Corrections can be made after the fact, but they are transparent to all parties so data can't be falsified or manipulated. This makes auditing easier and more reliable, and reduces the possibility of error. Consequently, some of the manual tasks involved in auditing may disappear, although it's unlikely auditors will be completely replaced.

Security may also be easier to manage using blockchain technology, because it makes financials all but impervious to hacks. This is due to the exceptionally strong security provided by blockchain encryption and the fact that you can't simply hack into the blockchain and make undetected, unauthorized changes.

As far as tax itself is concerned, Julian Pinson, Director, Tony Frost, Managing Director, and Professor Graeme Cooper, Consultant, Greenwoods & Herbert Smith Freehills have written about this in the Weekly Tax Bulletin. They say that having the operators of distributed ledgers examine, validate and record transactions doesn't change what the income tax questions are, nor does it obviously change the answers though there may be some nuances which warrant closer scrutiny when the parties to the transaction are in different countries. The absence of a meaningful source rule in Australian tax law will clearly be a nuisance in a blockchain world, just as it is in the current world. For GST, advisers have to think about the residence of the supplier and customer, sometimes where the parties are when the supply occurs and sometimes where 'things' are 'done'. Questions arise, for example, if the supply occurs when and where a contract is settled, when and where does that happen if the transaction occurs on a blockchain?

There is still much to be decided in developing policy and practical application of the blockchain technology. One issue the industry is already pondering is the treatment of GST and the new digital import laws. We need to think about the residence of the supplier and customer, in relation to where the parties are when the supply occurs and also where transactions take place in the blockchain. And will the blockchain be able to be used to determine whether the counterparty is an "Australian consumer".

All this and more is in the tax melting pot for considering blackchain and doubtless the ATO is closely watching developments.

How can accountants prepare for blockchain technology?

If a business depends on audit or other transactional services, it might consider diversifying into areas that are more creative, because the blockchain will make the audit process streamlined, fast, and automated. Accountants can add more value by providing strategic advice than by undertaking basic bookkeeping functions and the emergence of blockchain technology should accelerate firms' evolution away from these tasks.

There are still many unanswered questions about blockchain and how it will be adopted, so accountants, auditors and tax practitioners should make themselves part of that conversation to help drive the industry's direction.

You can read earlier ClearLaw articles on a range of professional adviser topics.

Melissa is a lawyer in the Maddocks Commercial team.

Melissa has been involved in acting for a range of commercial and professional industry clients.